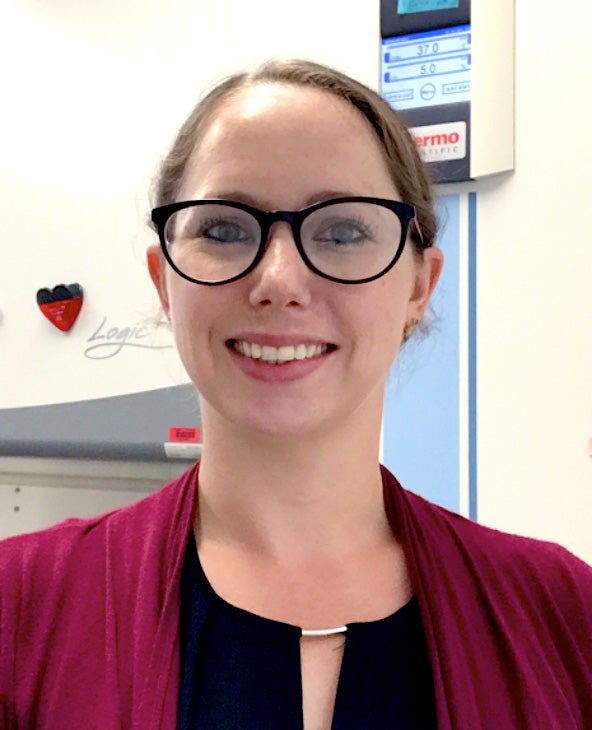 Elizabeth A. Blaber, Ph.D. is an Assistant Professor in the Biomedical Engineering Department at Rensselaer Polytechnic Institute (RPI), a Visiting Scientist with the Blue Marble Space Institute of Science at NASA Ames Research Center and a Space Biology Principal Investigator. She earned her Bachelor of Medical Sciences (Honors) at the University of New South Wales, Sydney, Australia and her Ph.D. in Molecular Genetics and Biochemistry from the same University. Prior to joining RPI, Dr. Blaber conducted research at NASA Ames Research Center. Throughout her career she has aimed to further NASA’s human research and space biology programs by investigating the role of microgravity on stem cell growth and regenerative functions. Dr. Blaber’s research is focused on understanding how stem cells and consequently, tissue regeneration, are affected by spaceflight stressors. She is also investigating the effects of alterations to the bone marrow microenvironment on peripheral tissue degeneration and disease progression.

Dr. Blaber has provided lead science support for over six spaceflight experiments, including several Space Shuttle missions with rodents (STS-131, STS-133 and STS-135), and embryonic stem cells (STL-1 and STL-2). Dr. Blaber investigated the role of the cell cycle in stem cell-based tissue regeneration during mechanical unloading in spaceflight during her NASA Postdoctoral Program Fellowship at NASA Ames and participated in the US/Russia collaborative Bion-M1 Mouse Biospecimen Sharing Program in Moscow, Russia. In 2014, she was awarded a NASA Space Biology Spaceflight Grant as a Principal Investigator to continue investigating the role of CDKN1a/p21 on somatic stem cell differentiation in space. Dr. Blaber is also a co-Investigator on the RR10 mission to assess in vivo bone formation in CDKN1a/p21 knockout and wildtype animals.  She is one of the Principal Investigators for the upcoming BionM2 mission and a Co-PI on an NSF/ISS collaborative spaceflight experiment aimed to launch in 2022.

Dr. Blaber’s contributions to spaceflight research include articles defining cellular, molecular and tissue mechanisms of bone loss in microgravity as well as the effects of microgravity mechanical unloading on mesenchymal and hematopoietic stem cell proliferation and differentiation during tissue regeneration.

Dr. Blaber is incredibly passionate about the spaceflight community, advocating for new opportunities and for enabling students and underrepresented populations to become involved in spaceflight research. She has been a member of ASGSB/ASGSR since 2010 and was a Student Board member prior to being elected to the Governing Board in 2016. Dr. Blaber has also served as Co-Chair of the Gravitational Physiology Scientific Sub-Committee for the Committee on Space Research (COSPAR) since 2014 and she currently serves on the Editorial Board for Stem Cells and Development and Frontiers in Physiology: Environmental, Aviation and Space Physiology.

Throughout her career at NASA Ames Research Center and at RPI, Dr. Blaber has mentored many high school, undergraduate and graduate students and provided opportunities to students to pursue their passions in research, engineering, spaceflight, and biological sciences. She has organized outreach activities for middle and high school students in minority communities both domestically and internationally and has spoken at several Women in STEM conferences. Dr. Blaber also participates in several STEAM mentorship programs including Saturday Morning Scholars and Engineering Ambassadors at RPI. Dr. Blaber also created, developed, and taught the GeneLab for High Schools Summer Training Program in 2017 aimed at introducing high school students to space-based research and bioinformatics analysis of GeneLab datasets. She has continued to direct and teach this program over the last 5 years, including transitioning the program to the virtual environment during 2020 and 2021. Currently Dr. Blaber is working with QuestStar III to enable similar semester-long programs for over 40,000 students from 23 school districts in the NY Capital Region.

Dr. Blaber has been honored with several prestigious awards including the Thora W. Halstead Young Investigator Award, the NASA Early Career Public Achievement Medal, NASA Honor Awards, the Australian-American Individual Innovator of the Year Award, the Emerging Space Leaders Grant from the International Astronautical Federation and has been invited to present her research at several prestigious institutes including the Center for Induced Pluripotent Stem Cell Research and Applications (CiRA) in Kyoto, Japan.